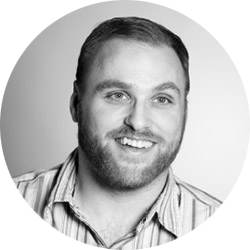 Born in beautiful Honolulu, Hawaii, Jeremy spent his childhood traveling the world – from seeing the Berlin Wall fall to coming face-to-face with a caribou in the wilds of Alaska.

Jeremy joined the Martin Agency in 2007 and has been involved in nearly every digital product produced in-house since. As a developer, he built Benjamin Moore’s “Design By What Matters”, American Cancer Society’s “More Birthdays” and the JFK Library “One Small Tweet” websites. Now a Technology Director, he spends his time closely working with creatives, clients, and developers crafting award winning digital solutions.

Prior to Martin, Jeremy was the Lead Developer at the Training Solutions and Services Division of QinetiQ North America. While at QinetiQ he was instrumental in developing the first SCORM 2004 complaint courseware and Learning Management System for the United States Navy. The success of that project lead to its implementation in each branch of the Department of Defense. But Jeremy didn’t spend all his time there navigating the bureaucracy of the US government - he also spent time expanding QinetiQ’s clientele to include Fluke, General Dynamics, and Giesecke & Devrient.